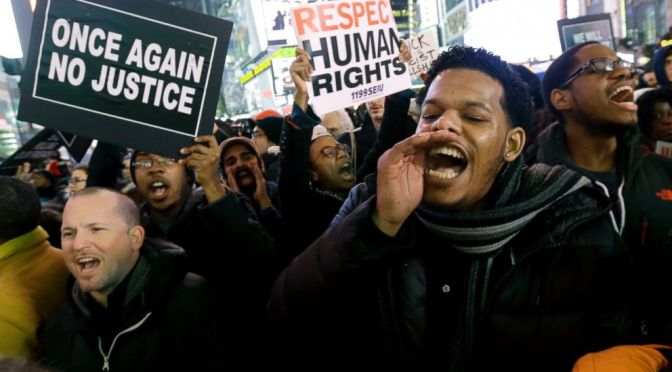 I’m not going to sit here and try to convince anyone that Big Brother is not watching. The NSA has made it perfectly clear that Americans are no longer entitled to privacy, and we as a people have accepted that. Why? Because of terrorism. Fair enough, but what happens when the threat is not from terrorists, but from our own police officers?

It seems our government has finally realized just how much of a liability our boys in blue have become. In response to the latest incident in Ferguson, President Obama has asked Congress for $75 million to invest in body cameras for our nation’s police officers. Highly controversial and very timely, the topic of police brutality and use of deadly force has become a daily nation-wide discussion.

Now look, I have friends who happen to be cops. I have friends who are cops-in-training. They’re college students who’re still wide-eyed and optimistic about the world waiting on the other side of their diploma. What’s their opinion on this, you ask? Simply put, it’s a mixed bag. These guys (and gals) are the future of law enforcement, and they’re smart enough to know that something has to be done about the declining public view of police officers in America. This is good, especially considering the ever-sensitive issue of race has been at the forefront of nearly every one of these cop-on-kid cases.

Think about it. Which would the American people prefer: a dead teenager in the street, or a speeding ticket? This may be a loaded question, but a valid one none-the-less. Eric Garner, Trayvon Martin, both proof that the race issue in he U.S. is far from settled, especially when police are involved. And thanks to 24-hour cable news networks and the omnipresent internet, these incidents are no longer isolated.

Can you imagine how much more galvanizing the civil rights movement would have been if pedestrians with camera phones had been in the streets of Birmingham when cops were blasting blacks with fire hoses? What about if YouTube was around for the 1968 Democratic National Convention in Chicago? Or the Watts Riots in LA a few years prior? Something tells me all of the above would have gotten more than a few hits.

The night the grand jury announced that Officer Wilson would not be charged in the shooting of Michael Brown, there were massive demonstrations and protests in Los Angeles, Boston, Chicago, and of course, St. Louis. And thanks to the miracle of modern media, the whole world got to see it as it was happening. Now imagine that Officer Wilson had been wearing a body camera on that fateful day in August. Would Brown still be alive? Would Wilson still have walked free? There’s no way to know for sure, but the implications are far too significant to ignore.

Equipping our nation’s police with body cams is one of the smartest moves our government can make. Sure, some may call it federal overreach, others may call it a waste of taxpayer money. But consider the amount of money in damages caused by the people of Ferguson when they burnt the city to the ground. I think $75 million worth of body cameras is a very sound investment both fiscally and morally.

One only has to go so far as to look at surrounding literature for further insight on the implications of race and police. A brilliant example of such literature is the 2000 book Driving While Black by Kenneth Meeks. In this bold book, Meeks lays bare the nature of race relations in the United States, and how profiling by police is not only possible, but occurs on a regular basis. “In 1999 in the wake of a national outcry by civil rights officials and leaders of color against the police practice of racial profiling across the country, the New Jersey state Attorney General’s office initiated an investigation into the allegation that its state troopers engaged in the practice.”

Sound familiar? That’s because it’s yet another example of history repeating itself. Take the Eric Garner incident for example. Garner was placed in a chokehold and wrestled to the ground by four police officers because he was allegedly “selling loose cigarettes.” An obese man, Garner died as a result of the altercation and the lack of oxygen it caused him. What makes the Garner incident so prominent? There was videotape. Yes, someone was recording the tussle between the cops and Garner, and the video soon got widespread media attention.

This incident shows that racial discrimination by police is not only a long-standing practice, but also an ongoing problem in our communities. Will constant video surveillance prevent deaths like those of Michael Brown and Eric Garner? Some say no, after another grand jury acquitted all four police officers who where involved in Eric Garner’s death. But I say equipping our nation’s cops with a little supervision is still a good idea.

While this may be viewed as a punishment, officers themselves may actually support the measure after conflicting reports surfaced regarding whether or not Michael Brown had his hands up during his altercation with Officer Wilson. According to the St. Louis Post-Dispatch, “Police officers understandably object to the notion that one of their own would shoot someone with his hands up.” Politicians at both the national and local levels support the implementation of body cams. Most notably, NYC Mayor Bill de Blasio was quoted in the Wall Street Journal as saying, “We’re going to see the officers’ perspective, literally. I think that’s powerful.” And I agree. After all, who polices the police?