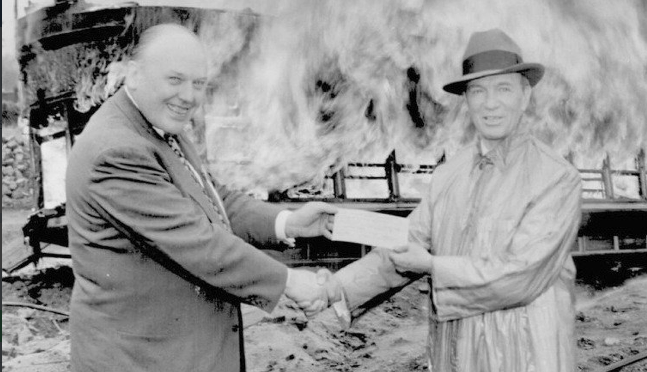 A story many do not know is that of the early days of the light rail in the United States. The fact that it is uncommon knowledge is a shame, because the repercussions from what happened in those early days of public transportation can still be seen clearly on the streets of the U.S. to this day.

In the early 20th century, it was said that one could travel from New York to San Diego by simply hopping from one trolley to another. Unsurprisingly, competition was forming around the same time, in this case it was the bus lines.

Within a matter of years, wealthy bus line owners from all around the country bought up rail after rail and systematically destroyed all of the trollies. This was to ensure big oil’s grasp on the commuters of America by forcing them to ride oil-powered buses rather than electric street cars.

The result had a devastating effect on our environment and infrastructure. Millions of tons of CO2 from city buses has rocketed into the atmosphere and our roads have been clogged and eroded by the heavy, bulky machines.

The history is as follows: Corporate giants Mack Truck, Firestone, Phillips, General Motors and Standard Oil banded together in the 1930’s and 40’s to make a “secret company” who’s task was to buy all the passenger cars and trolley lines. In the documentary Pump, author Edwin Black who wrote about this topic at length in Internal Combustion,  gave a chilling summary of what happened next.

“… the rails were pulled up, the trolley cars themselves were burned in public bonfires, and they replaced them with smelly, oil-consuming motor buses. Eventually, the federal government discovered that this was a conspiracy to subvert mass transit. All five corporations were indicted, they were tried, they were found guilty. A corporate conspiracy was responsible for destroying the trolleys in America.”

The word “conspiracy” always insights skepticism among those who hear it used to describe major historical events, but unlike in most cases, the conspiracy to destroy America’s electric rail system is well-supported by documented evidence. And it all starts with a company called National City Lines.

National City Lanes was founded in Minnesota in 1920 as a modest local transport company operating two buses. Part of the operations were reorganized into a holding company in 1936 and expanded about two years later with funding from General Motors, Firestone Tire, Standard Oil of California, and Phillips Petroleum.

The five companies involved NCL in their pocketbooks for the sole purpose of acquiring local transit systems throughout the United States. This eventually became known as the General Motors streetcar conspiracy.

The plan was as merciless as it was intricate. When National City Lines would acquire a transit system, the trolley rails would be ripped up, the overhead wires would be cut down, and the system would be converted to buses within 90 days.

General Motors scrapped electrically powered streetcars and trolley-buses, which they did not make, and substituted them with gasoline powered buses that they manufactured. This way, every aspect of supply and demand was tilted in their favor. The cars and busses that GM designed and manufactured would burn Standard Oil gasoline and roll on Firestone rubber tires.

The man behind all this? Alfred P. Sloan, Jr., a highly intelligent man who studied at MIT and was hired by General Motors to expand auto sales and maximize profits by eliminating streetcars.

The statistics on public transit at the time are truly awe-inspiring, and one can almost see why Mr. Sloan might have felt threatened enough to take such drastic action.  At the time, 90 percent of all trips were by rail, chiefly electric rail; only one in 10 Americans owned an automobile.

There were 1,200 separate electric street and interurban railways, a thriving and profitable industry with 44,000 miles of track, 300,000 employees, 15 billion annual passengers, and $1 billion in income. Virtually every city and town in America of more than 2,500 people had its own electric rail system, but not for long.

As the largest depositor in the nation’s leading banks, GM enjoyed financial leverage over the electric railways, which relied heavily on these banks to supply their capital needs. According to U.S. Department of Justice documents, officials of GM visited banks used by railways in Philadelphia, Dallas, Kansas City and other locations, and, by offering them millions in additional deposits, persuaded their rail clients to convert to motor vehicles.

And where rail systems were publicly owned and could not be bought, like the municipal railway of St. Petersburg, Florida, GM bribed officials to get their way. According to FBI files, General Motors provided complimentary Cadillacs to railway officials who converted to bus-based systems.

In 1936 National City Lines and General Motors was found guilty of subverting public transit by a federal court. The two were fined $5,000 apiece, while their management staff were fined $1 each.

However, later Justice Department investigations got nowhere because by 1932 GM had created the National Highway Users Conference, a powerful Washington lobby to push for more freeways and silence discussion of diesel or gasoline pollution. Alfred P. Sloan headed the conference for 30 years until another GM man took over. Today, the commission is headed by Greg Cohen, President and CEO of the NHUC.

In 1949, National City Lines were again convicted in Federal court (and in 1951 the conviction was upheld) for destroying the electrified rail and electric bus transit systems in 44 American cities.

E.J. Quinby, president and founder of the Electric Railroader’s Association, bravely persuaded the government to bring the lawsuit against GM and its powerful automotive allies.

Despite these convictions, the government refused to punish the automotive giants beyond the small symbolic fines described above.

Yet still, more attempts to hold the guilty companies accountable were made. In 1972, then U.S. Senator Ted Kennedy called for a Federal investigation into G.M.’s alleged conspiratorial destruction of the U.S. rail industry and public mass transit industry, in order to facilitate the sale of automobiles.

This led to Senate Bill 1167 of 1974 “The Industrial Reorganization Act” and the now little known Ground Transportation Hearings of April 1974 – which were sidetracked by the resignation of then U.S. President Richard Nixon on August 8, 1974.

To date there has not been another attempt to prosecute the five companies involved with taking down America’s light rail and electric trolley systems.

What seems overwhelmingly clear is not only were we as Americans robbed of the opportunity to have efficient public transit on the same level as other developed nations, but we were also robbed of the opportunity to have less polluted air and less congested roads. The good news is even if our government cant adequately punish companies for their crimes, the past does not have to remain the status quo.

If we come together as a society and make it known that we care enough about this issue to do something about it, we can re-instate the rail systems, reduce the number of buses in use across the country, build more trollies and light rail systems throughout cities, and maybe even reclaim the day when it could be truthfully uttered that one can travel from New York to San Diego by light rail simply my switching trains again and again.