It’s always baffled me that an issue as important as our environment could become just another political pawn.

There’s so much riding on whether or not humans are truly destroying the Earth that one would think politicians and the public would be able to come to a consensus. But no, now it’s just another he-said/she-said debate in the halls of Washington and around the dinner table… until you step into the lab.

“There are natural climate cycles but the current CO2 increase is not part of it,” said Susanne Neuer, Senior Sustainability Scientist at ASU. “The Earth has gone though changes much hotter than we have today. There are traces in the geological record where there was no ice anywhere in the Polar Regions. If all land ice currently bound on the continent is melted, the sea level would be 70 meters higher, and there have been much larger changes in sea level than that,” said Neuer.

In college-level Psychical Geography courses, students are presented with evidence that the Earth has undergone extensive heating and cooling cycles throughout the course of its history. According to temperature data, the period we’re living in now is “unusually warm” with record droughts and wildfires.

This is partially due to the fact that the amount of CO2 in the atmosphere recently reached its highest point in at least one million years. If you look at the history of Earth’s CO2 levels on the graph below, you’ll see that the spike in CO2 over the last 150 years is very insubstantial when compared to previous concentrations of the gas.

Components of Earth’s atmosphere over the last five billion years. Photo from a GPH 111 course at ASU.

This is not to say that mankind is not affecting its atmosphere adversely, but rather there are far more factors to consider in climate change than just CO2. Yes, admittedly the last time CO2 levels in the atmosphere were this high, humans did not yet inhabit the planet. But the fact that we are still here proves it wasn’t the CO2 level that was making life for humans unsustainable at that time.

What should be most worrying to people is that these factors are, for the most part, out of human control (at least for the next hundred years or so.)

Without wishing to get too deep into another subject matter, according to the Kardashev theory, Earth is currently a Type 0 civilization. This means we haven’t yet advanced far enough technologically to harness the power of all the weather events on our planet. Scientists predict human beings will be able to do so sometime early in the 22nd century.

Until then, we must tread very carefully with the ecosystems of Earth, because they ultimately have more power over us than we do over them.

Neuer outlined the build-up to where we are now environmentally and explained where we’re headed as an industrial world. “Since [the Industrial Revolution] CO2 has increased at unprecedented levels – which is what’s really scary,” she said. “The CO2 level was at 180 parts per million during the last Ice Age, and should be at 280 parts per million now. Today’s CO2 levels are at 400 ppm, more than 40% higher. That was a rise that happened only in the past 150 years or so. We’re already seeing the effects of what we’ve done to our planet.”

According to Neuer, the ocean is taking up 90 percent of the planet’s heat and swallows up 30 percent of the CO2 released by fossil fuel burning into the atmosphere. In other words, it plays large and important role in our climate.

Neuer went on to explain how methane, while often talked about in the climate debate, is not as harmful as carbon dioxide. “Most methane disperses in the atmosphere, and the little that doesn’t is transformed into CO2,” said Neuer. “CO2 creates a greater impact than methane does because it is a so much more abundant greenhouse gas.”

Neuer cited her own research as evidence to support her claims. “In my own work I’ve seen surface-ocean warming and reduction of pH, which comes from CO2 being taken up by the ocean,” she said. “Reduction of pH, so-called ocean acidification, hurts sea life with carbonate shells or skeletons, such as corals.

“When this happens, the ocean currents get disturbed and don’t flow naturally anymore, which is what caused the dramatic weather events shown in the movie The Day After Tomorrow, but on unrealistically fast time-scales.”

Neuer says it’s predicted in some model calculations that this disruption could come to a head in the next 200 years if we don’t get our act together. 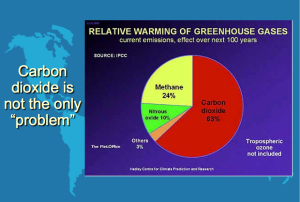 The graph shows the multiple elements in our atmosphere causing climate change. Photo from a GPH 111 course at ASU.

Nancy Selover, State Climatologist for Arizona, took time to comment on the significance of record-breaking high and low temperatures so often reported on.

“We’ve seen trends towards hotter records more than colder records,” said Selover. “I look at the trends in terms of climate and try to stay out of the political side of the issue because we can’t attribute what’s causing it to a single thing. If you want to actually change the temperature of the globe then you should want to know how to pull the carbon back out of the atmosphere.”

Selover went on to explain that there are thermometers placed all over the globe to measure climate, including instruments on top of buoys to get a reading on temperatures over the oceans. But she says that there are areas of the globe that are either inaccessible or too inhospitable for humans to install temperature-scanning devices.

Despite some areas going unrecorded, Selover insists that scientists still receive an accurate reading of overall global temperature shifts. “Not every singe place responds the same,” she said. “When you take a global average you take an average of hot and cold data. People are going to notice what’s going on where they live.”

Selover explained that what people notice is more local in terms of temperature change, and that they don’t get too panicky about global climate swings. “The Earth is always changing in terms of its climate and it’s impossible for it not to,” she said. “People would like for temperatures to stay the way they are now because that’s what we’re used to, but average temperatures won’t stay the same forever.”

Dr. Selover was also adamant about there not being enough done in terms of cleaning up the atmosphere, and that all the money and research seems to be going towards prevention. “If they said ‘Let’s stop burning fossil fuels and clean up the air to avoid respiratory issues’, it could be done in way less than 100 years,” she said.

Selover says that removing CO2 from our air would have a more immediate impact than waiting for the CO2 to dissipate on its own. “You can’t just say ‘We need to stop putting CO2 up there.’ We also need to be cleaning it up,” she said.

Happily, research professors have been working on CO2 removal methods very similar to what Dr. Selover described. The Center for Negative Carbon Emissions at ASU experiments with carbon-removal methods, which include algae growth and “capturing” carbon in rocks.

Steve Atkins, Senior Engineer at the CNCE, has been working with his colleagues on technologies that remove carbon in different ways.

“I’ve been primarily focused on building direct air capture devices,” Atkins said. “They capture CO2 from the atoms in the air. At the Center we have something called an Ionic Resin Exchange Membrane, and basically what it does is collect CO2 from the atmosphere.”

According to Atkins, by feeding CO2 to algae they’re able to grow and eventually be converted into bio fuels. “Algae needs CO2 to grow better and faster. It’s how a lot of greenhouses pump elevated levels of CO2 into their structure,” he said.

“The overall goal is to be able to capture CO2 from the atmosphere at a low cost,” said Atkins. “We’re aiming to do this at a cost that is below what everyone else can do. We’re looking at 100 dollars per ton of CO2 that’s captured.” Atkins says that a secondary goal is to demonstrate that the process is scalable and economically viable. “We need to demonstrate this technology at a commercial scale,” he said.

The Center’s plan is to scale the project up to about one ton of CO2 removed from the air per day. But to do this they’d have to produce and deploy the devices that facilitate this process at the same rate that the U.S. produces automobiles. “We mass-produce so many other things in this country. We can do this too,” said Atkins. 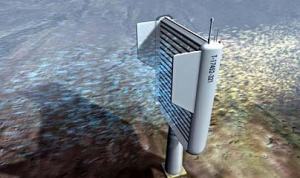 An artist’s impression of the CO2 ‘scrubber’ designed by Klaus Lackner. Photo from telegraph.co.uk.

According to the Center, the impact on the environment will come with the mass production of this machine. “Worst-case scenario, we would need 100 million of these devices out there to reduce carbon levels,” said Atkins.

That may sound like a lot of machines to build and have taking up space, but remember that there are 165 thousand cars produced around the world every day. The difference is, instead of producing carbon dioxide like cars do, these machines will actually consume it.

Now for the million-dollar question: Will any of this save us? Or is it too late to make a change?

“It is conceivable that at 400 ppm we’ve already exceeded the concentration needed to cause catastrophic climate change,” said Atkins. “To get back, we’d have to go negative – that is, we’d have to extract CO2 from the air, not just reduce or eliminate CO2 emissions.”

But are we at least going in the right direction? Atkins doesn’t think so. He says he’s pessimistic about the political and financial side of this issue.

According to climatologists’ calculations, in order to reach emission goals, 80 percent of the Earth’s oil has to stay in the ground. Atkins sees that as contrary to oil companies’ plans and financial interests. “We’ve made some progress in the fossil fuel industry but only a few coal plants have closed, and generally for financial, not environmental, reasons,” he said.

Perhaps the most foreboding thing about global climate change is that despite all of our technology, there is no timetable available. “I don’t know when we’ll know for sure whether or not we’re too late to stop the two degree global temperature increase that will lead to an irreversible climate shift,” said Atkins. “But I do think that climatologists are being conservative with their estimates. I think we’re going to find out sooner than most people think.”