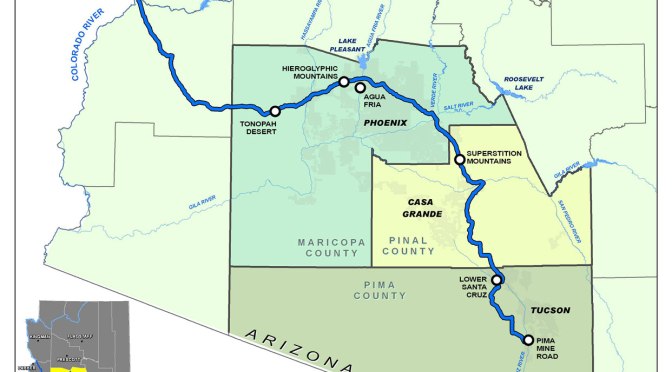 After California Governor Jerry Brown announced mandatory state-wide water restrictions in April, reducing our wet footprint seemed to finally become a topic of household discussion; not only in California, but across the nation. But with California grabbing all the water-related headlines, it’s made it difficult for less-populated states like Arizona and New Mexico to gain ground in the national water conservation discussion.

The entire Southwest is being effected by drought, not just the Golden State. It’s important that we as Americans give proper attention to the situation in Arizona, New Mexico and West Texas, which together are home to approximately 10 million people. Arizona in particular has an interesting irrigation system in place, known as the Central Arizona Project.

The CAP is a fresh-water canal that winds its way through the state, providing drinking/irrigation water to approx. 5 million of Arizona’s 6.7 million residents. Built in 1985, the CAP is a 336-mile system of aqueducts that divert water from the Colorado River and Lake Havasu. It serves as the “largest single resource of renewable water supplies in the state of Arizona” according to its website, http://www.cap-az.com.

Canals like this are a brilliant example of how we can keep the American Southwest inhabitable for generations to come, but only if we manage to sustain them. The reduction of water levels in the Colorado River has been a primary concern for the CAP, and its members are working to limit the use of river water by the people in the region.

The electrical plant which provides power to the CAP (thus enabling the CAP to pump water to its consumer base) has recently signed an agreement with the EPA to reduce its pollution output in order to remain open until 2044; after that, the CAP’s consumer base may have to pay higher rates in order to keep the canal system pumping water and thus providing power. The CAP’s annual report for 2014 is available here.

The canal cost the state of Arizona $4 billion to construct, and while that is a hefty sum, it’s an investment in the future. Citizens of Nevada, New Mexico, Texas, Utah, and California would be wise to contact their representatives and advocate for the construction of a canal on par with what Arizona has built. And with the five states listed above having a combined budget of $293.6 billion for 2015, it’s fairly evident that they could carve out enough money to build canals of their own (perhaps even conjoin them to create a sort of manmade mega-river, similar to the Colorado.)

If more states that rely on water from the Colorado River (especially those in the southwest) could construct a system of aqueducts on the same level as the CAP, then the next generation of Americans born in that region would need not worry about the source of their fresh water. All it takes is a slice of the state budget and voter initiative on the part of those who call our beautiful deserts home.

Governor Doug Ducey (R-AZ) and his office was unavailable for comment regarding the future of the CAP. To contact the Central Arizona Project with any questions or concerns, call (623) 869-2333 or email them at info@cap-az.com.